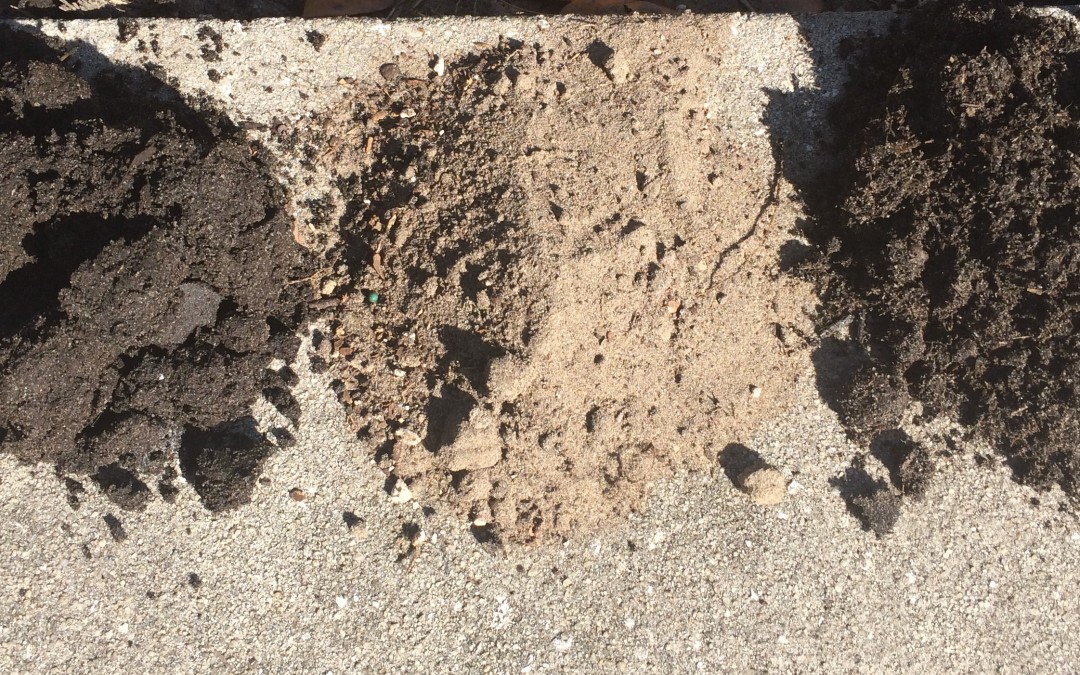 Ugh. The dreaded sidewalk strip between the road and the walkway. Otherwise known as the âstupid strip,â the âhell stripâ or even the âzone of death.â Okay, I made up zone of death, but maybe it is fitting?

This pitiful area is usually not a gardenerâs friend. In my case our sidewalk strip is 22â³ wide. What in the world are you supposed to grow in here? Not turfgrass, most likely weeds, maybe some mulch? Â This sidewalk strip has brought so much dismay to gardeners and homeowners that it even has its own book! Â Author Evelyn Hadden recently wrote, âHellstrip Gardening: Create a Paradise between the Sidewalk and the Curb.â Â The description of the book reads âThe hellstrip â the space between a street and a public sidewalk, also known as a tree park, boulevard, meridian, and planting strip â is finally getting the attention it deserves!â

Well it was deserving some attention at our house, thatâs for sure. 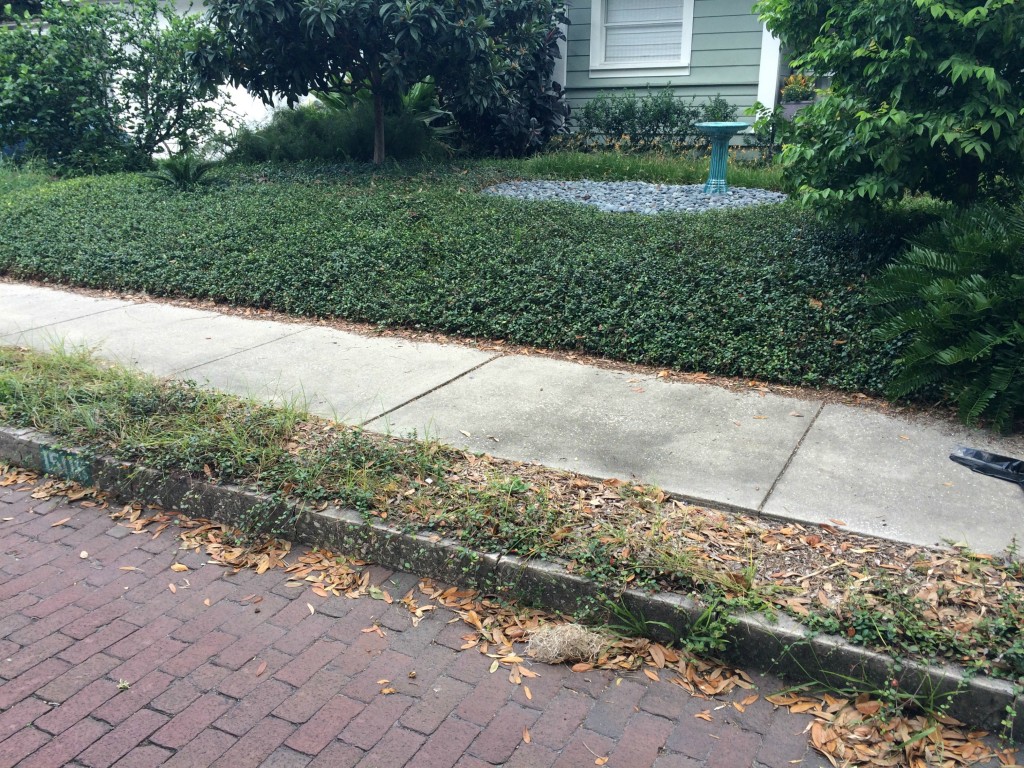 This area has just been killing me! Â The scraggly Asiatic jasmine plants that you see here were planted the same day as the jasmine in the background but you certainly wouldnât guess that by looking. Almost three years later and the plants in this sidewalk strip have yet to fill in. 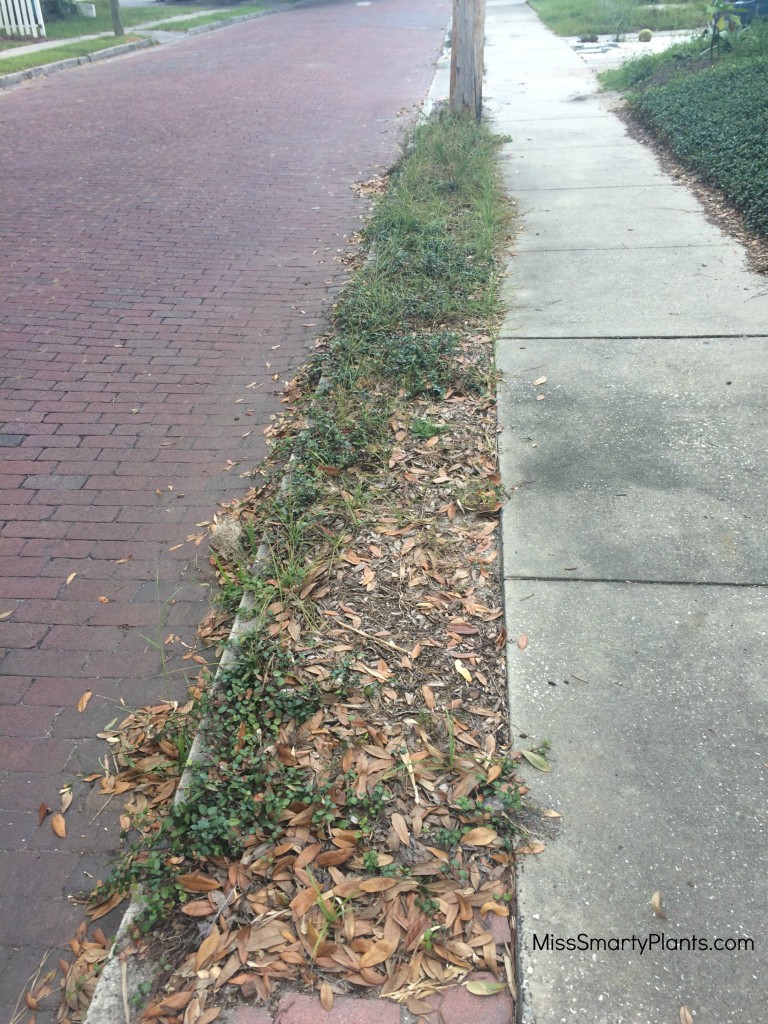 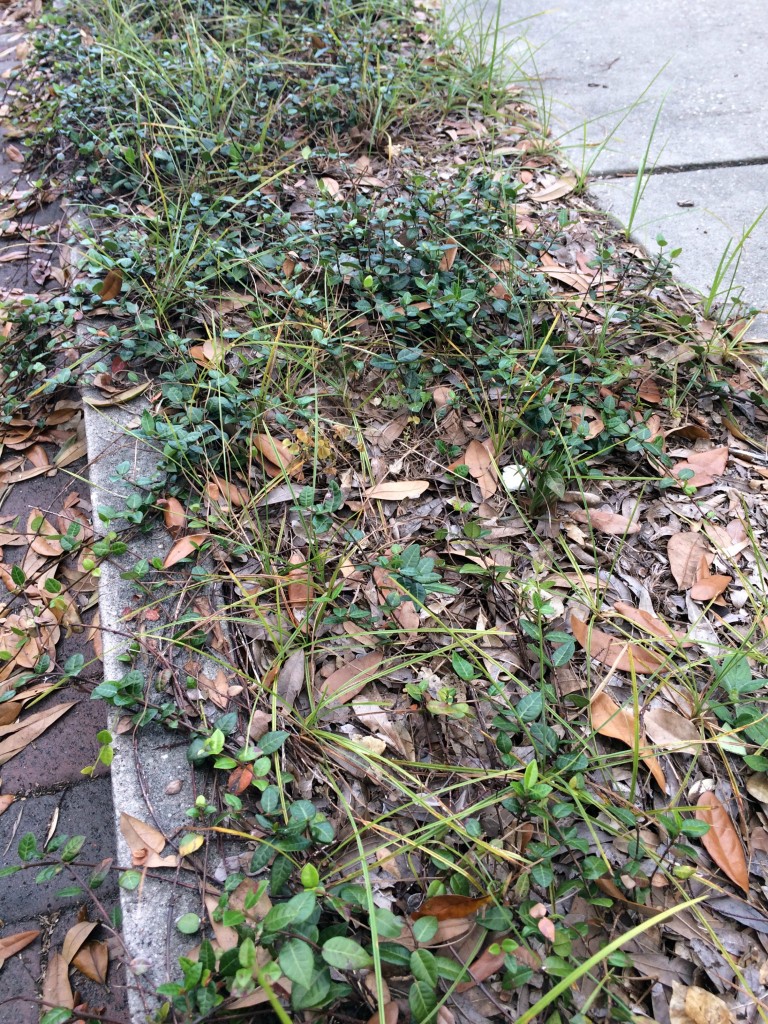 Iâve decided its time to address this problem! Â I am starting at the very beginning here and focusing on one of the main issues of the very poor, sandy soil here. With this in mind I began to remove all of the plants and weeds along with about 2â³ of sand from the entire strip. It was tempting to just add new soil on top of the old, but it was already level with the sidewalk and I donât want to be battling the soil washing out.

Truth be told this was a much bigger job than I imagined. It took me five evenings of scooping out sand to get it finished. It was easy to remove the plants and weeds from this sidewalk strip, but I could only handle so much sand at one time.

When it was finally done the fun part was ready to begin! Â I went to my local home improvement store and bought 8 bags of compost and 8 bags of topsoil. In this photo you can see the three (left to right): compost, sandy soil, topsoil. Â It makes it very apparent why some soil amendments were needed. Both the compost and the topsoil will have the organic matter needed to retain moisture and nutrients. I think a mix of the two is a good composition for most plants. 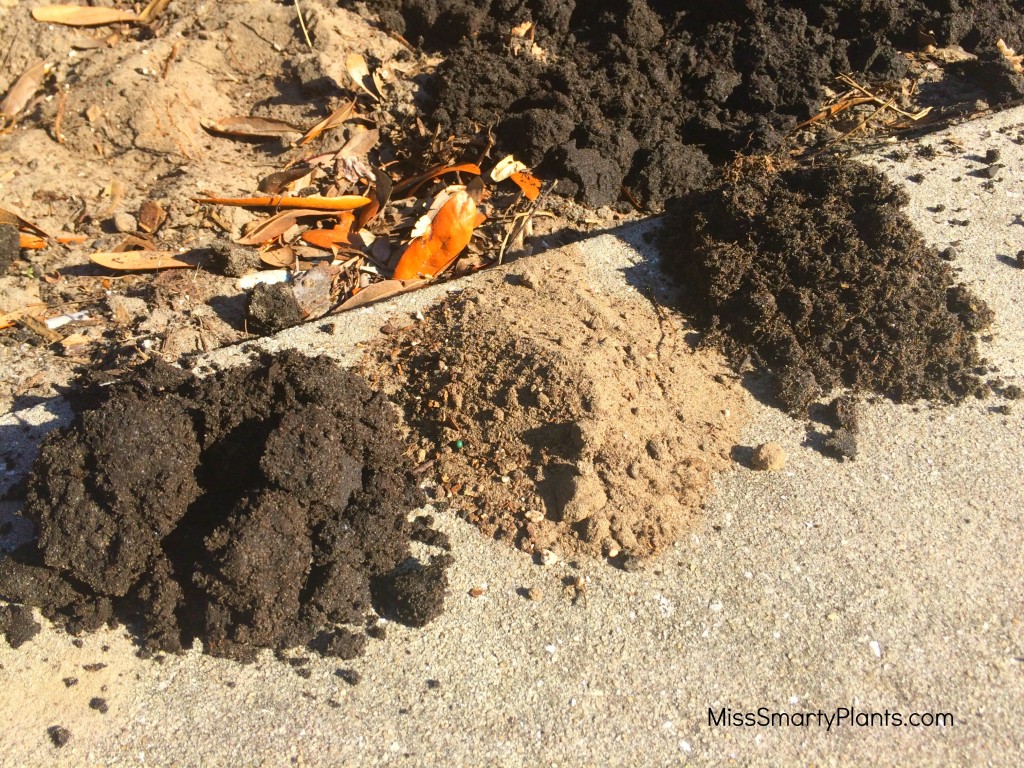 I spread the bags out along the sidewalk strip, alternating between the compost and topsoil. Once it was in place I worked it in slightly with a shovel to incorporate it with the current soil. This easy step will help encourage the new plants to grow deeper roots rather than just staying in the really good soil. Iâve also found that just pouring a bag of compost or topsoil on top of the ground will just kind of float on top, not really getting incorporated on its own. 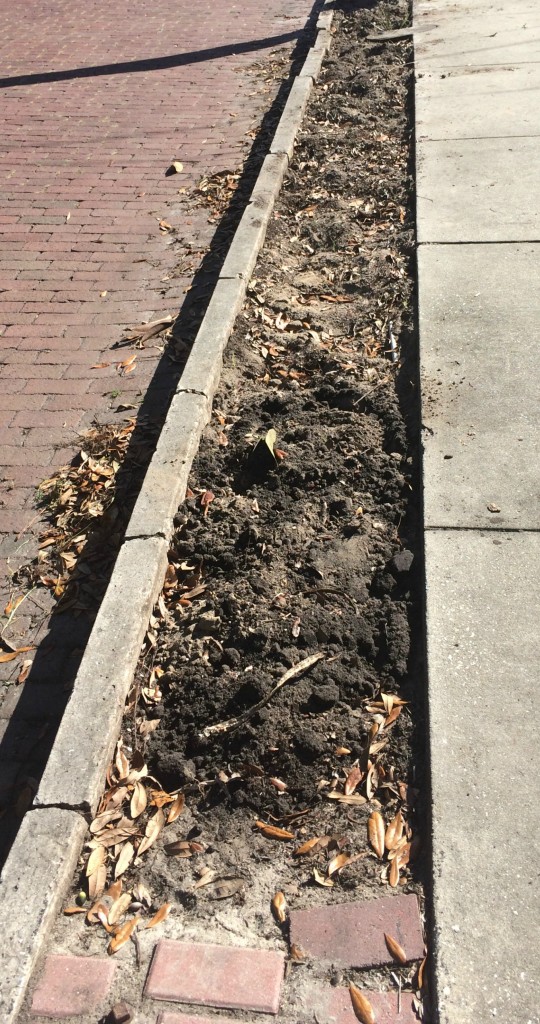 Now the question remains: What plants will do well in this narrow sidewalk strip?

While visiting a garden center I came across a plant Iâve never seen before called Mecardonia procumbens âMagic Carpet Yellowâ. Â I totally geek out when I see new plants, but this one looks to me like it will be a good one if it can stand the humidity of summer. It has a trailing habit, small leaves and little yellow flowers. The gentleman working wasnât familiar with it either and I couldnât find much information online. I bought five.

A big part of this project was installing microirrigation in the sidewalk strip, but I am going to keep that for my next post. It is a really important part!

Here you can see the plants set out and still in their pots. Ideally I would like to have 10 of these, but there were only five available. I am hoping they will spread slowly and fill in the area over time. 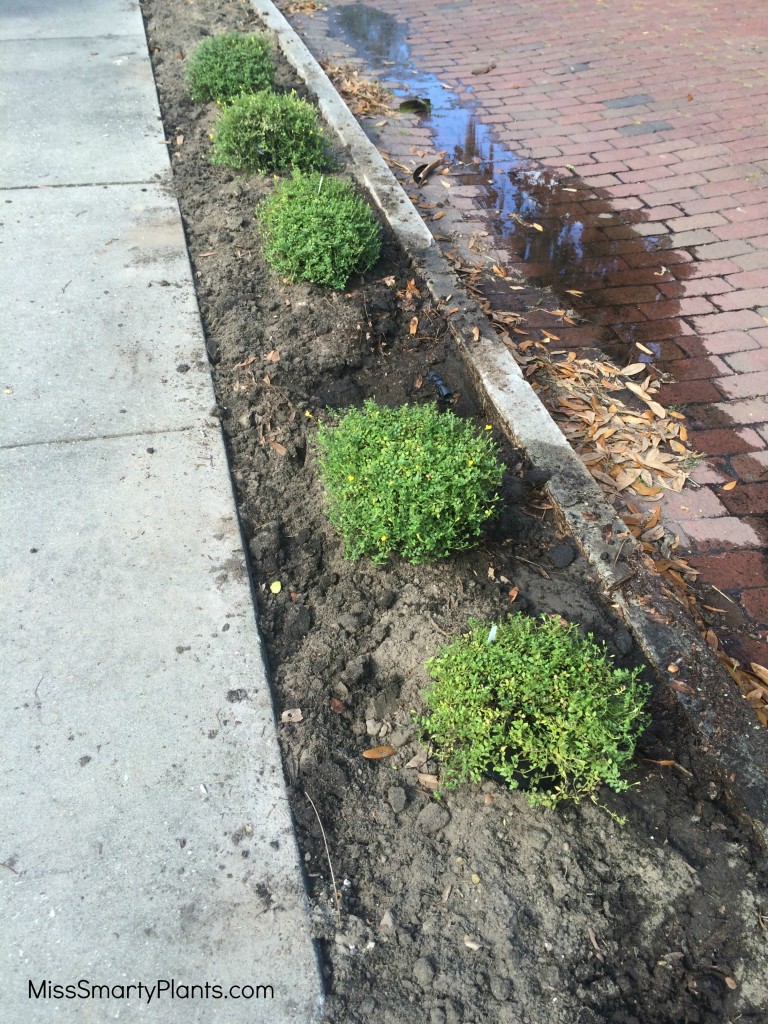 With the irrigation and plants in place, a light application of mulch gave this sidewalk strip planting the finishing touch it needed. What an improvement from the weeds growing there before! I think theÂ Mecardonia procumbens âMagic Carpet Yellowâ will do well, but if it doesnât it wonât take much effort for me to install new plants in the good soil. What do you think? Any other plants you want to try in your sidewalk strip? 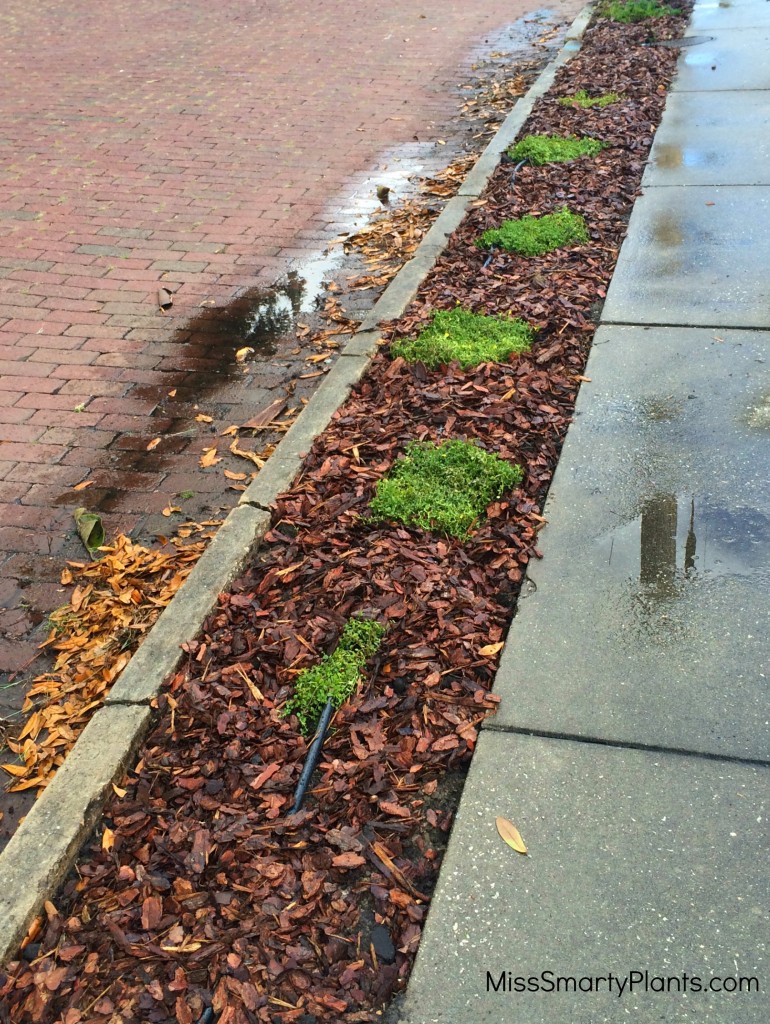 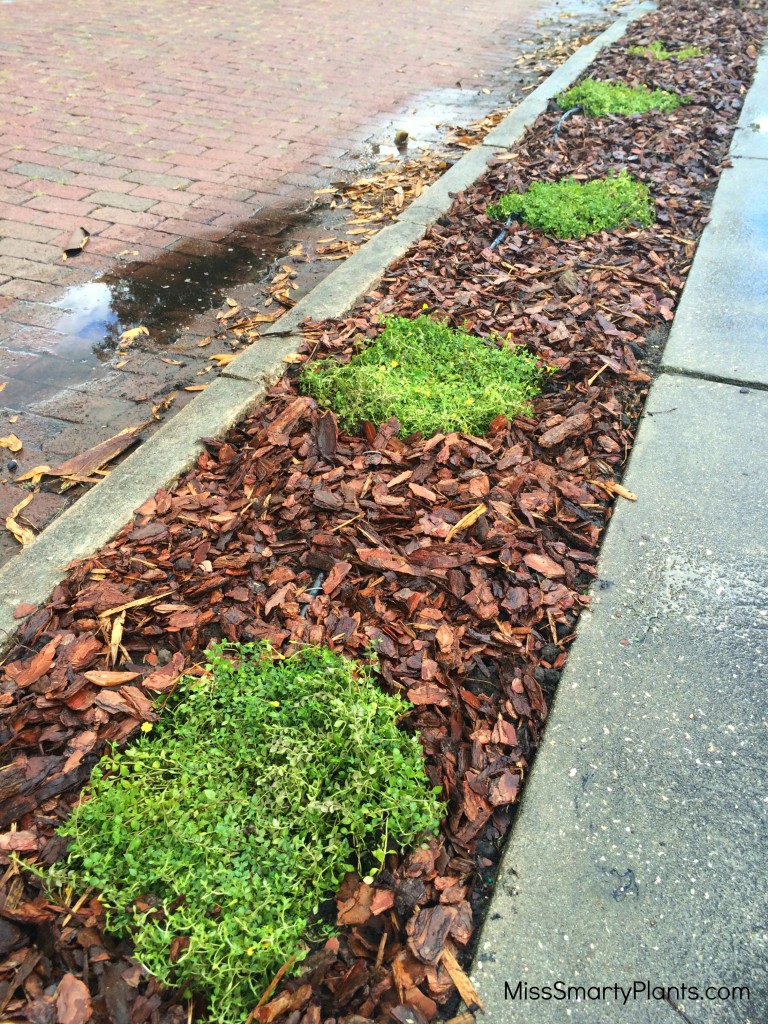