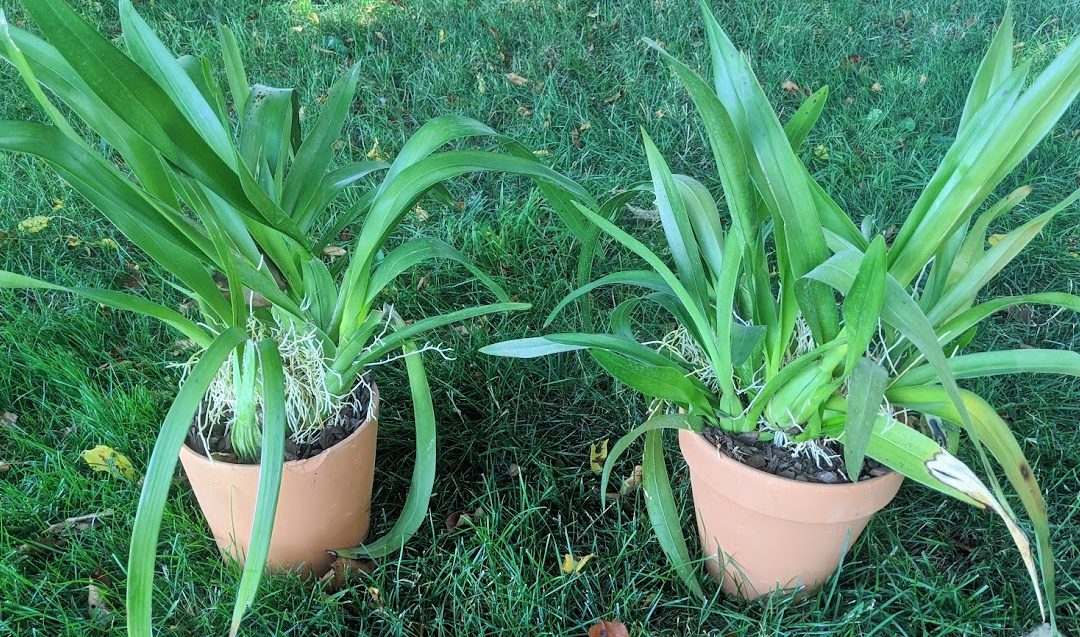 Iâm long overdue to spend some time repotting orchids. Donât believe me? Just look at this poor oncidium orchid! It âjumpedâ off the shelf last year breaking the pot, the roots are growing everywhere, and I havenât done a darn thing about it. Until today.

I know I should be embarrassed by this, and I am, slightly! Just look at all of these roots growing out in the air! I laughed at the fact that when we were in Florida I grew my orchids in trees so I never had to repot any of them!

My first step was to remove this massive plant from its (broken) pot. It came out fairly easily and left me with a few decisions for repotting orchids.

I decided to use a sharp knife to cut this into two parts. They are not even, but there seemed to be a natural break in here where I wouldnât have to cut much.

I used fresh orchid bark in the bottom of the pot and to hold these orchids in place. Orchids do not use potting soil. I know this seems obvious to some, but trust me this is apparently not common sense.

I chose pots that were just large enough to jam the plants in and get a little bit of bark around the outside. Orchids like to be pot bound, so there isnât a benefit to increasing the size more than necessary. I tucked the roots down in the orchid bark a little bit to help encourage them to grow in there. I have a feeling the previous pine bark was so broken down that they werenât getting enough air in there before.

I left them sitting a little big high to make sure they have the oxygen they need and that the pseudobulbs are visible.

This plant hasnât flowered in a couple of years and hopefully the time spent repotting orchids will change that this year!