Agaves and Aloes at the South Coast Botanic Garden 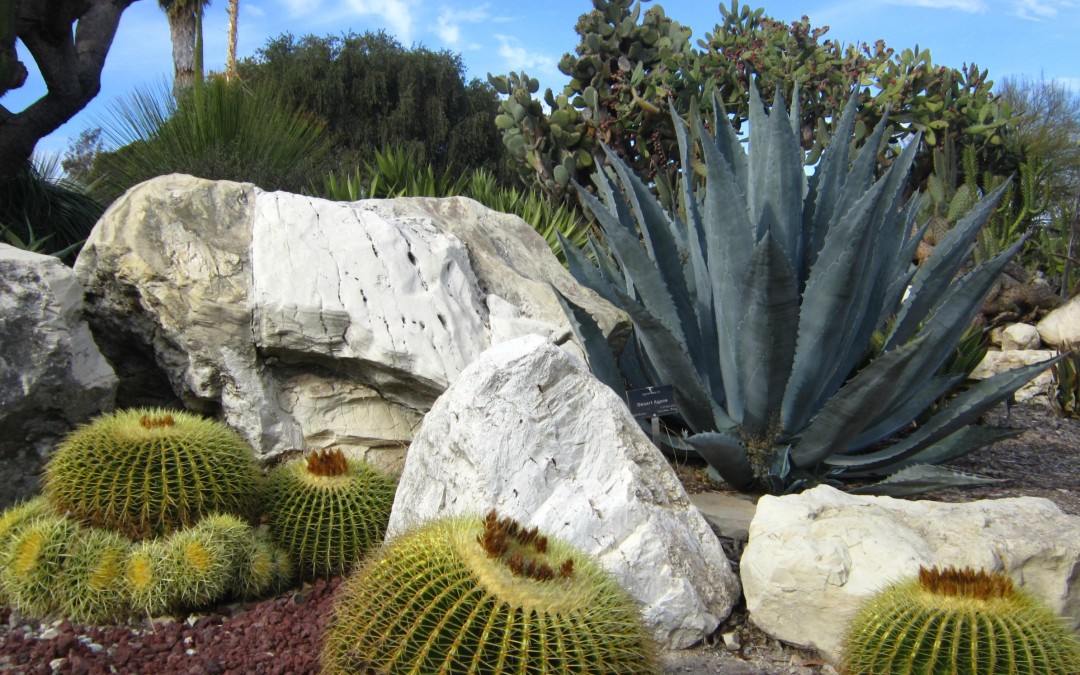 Agaves and aloesÂ are two of the toughest groups of plants for a dry garden. In Florida we can use these plants for punctuated form and interesting textures. In CaliforniaÂ agaves and aloes are becoming increasinglyÂ essential as water supplies are limited and plants and landscapes need to be more drought tolerant. Lucky for me, I love these plants and couldnât wait to explore more when visiting southern California recently. 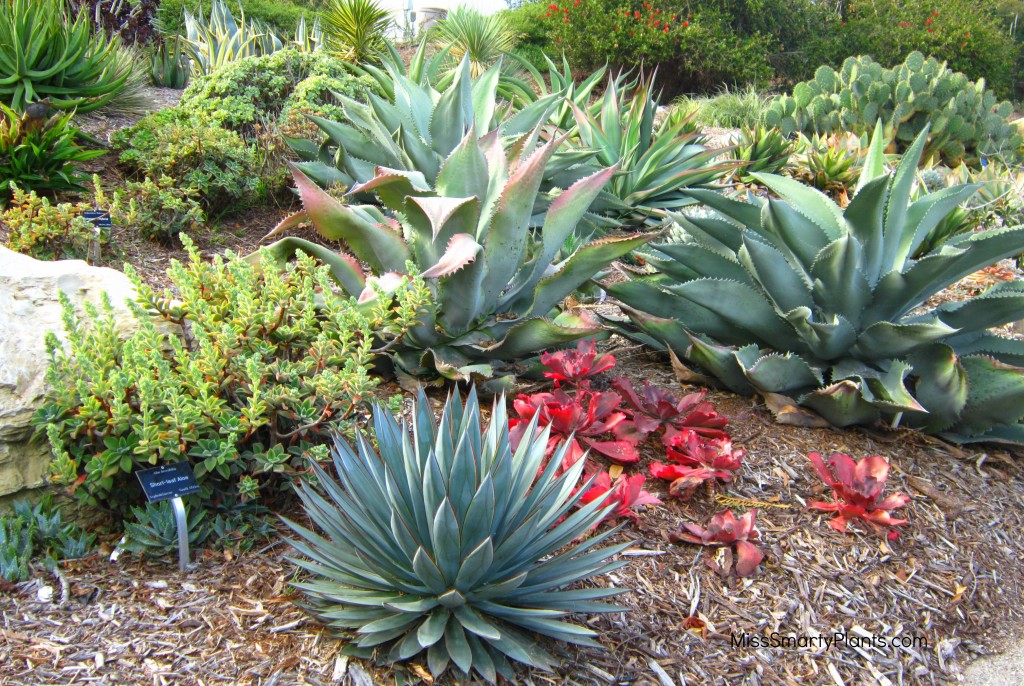 The South Coast Botanic Garden in Palos Verdes, California has a wide variety of plant collections and amazing plants where you could spend an entire morning orÂ afternoon exploring the meandering paths and discovering trees and plants from around the world. There was so much to take in on a recent visit I just couldnât decide where to start!Â  So, in an almost alphabetical methodology, the agaves and aloes justify their very own blog post.

The Desert Garden at South Coast Botanic Garden features a wide variety of succulents mixed in with the agaves and aloes. I would love to have spent the entire day there photographing each specimen, but it didnât seem fair to my aunt. And we were looking forward to lunch and drinks too.

Agave ovatifolia, the Whaleâs Tongue Agave, is one of the classicÂ solitary agaves. It rarely sends out pups at the base as many other varieties will do, and it reaches an overall size of 3-4â² wide. It has an icy blue color and is well armed withÂ sharp teethÂ along the leaf edges as well as the tip. 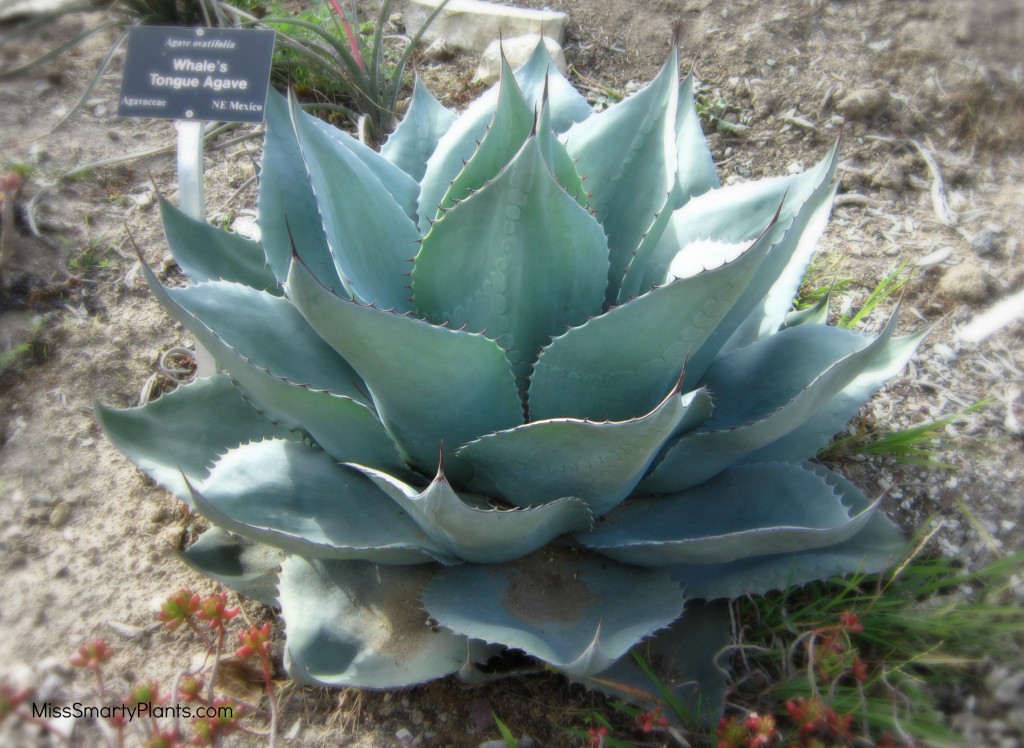 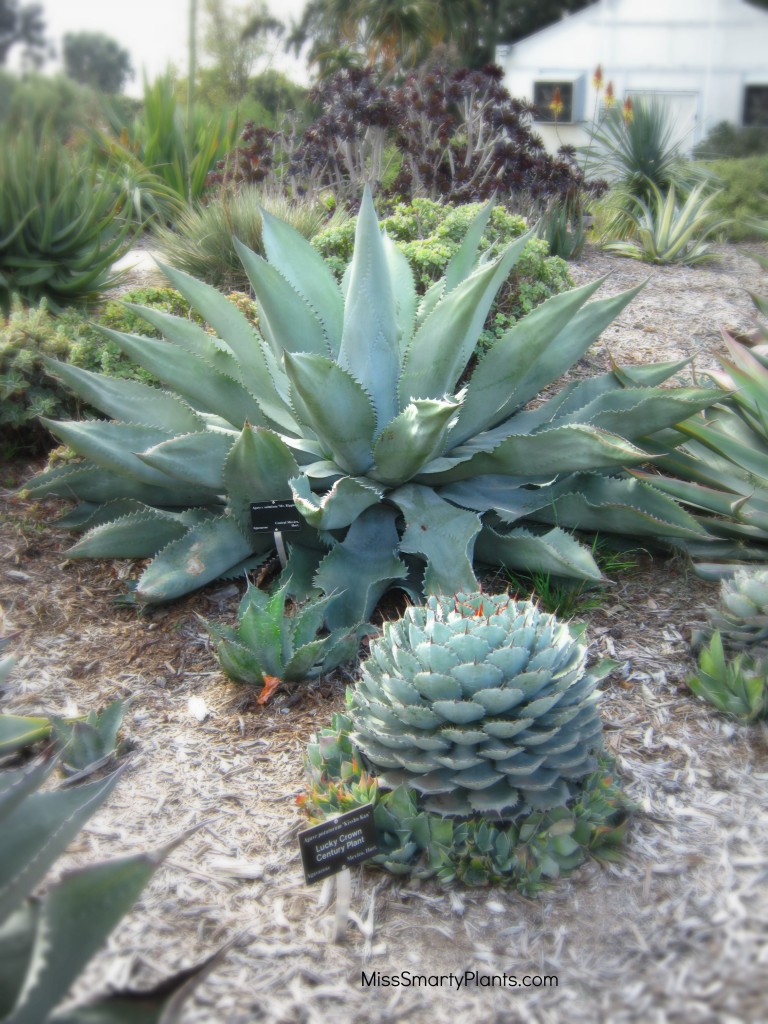 Agave âCornelius,â the Quasimoto Agave, has gorgeous variegated leaves with strong yellow edges and the dark green center stripe.Â  Just look at this color!Â  The University of Florida publication, âAgave and Yuccaâ cites this variety as 1-2â² tall and 2-4â² wide. I would say it tends to be on the large side of this range and the plant here was 3â² wide and just beginning to get a few pups at the base. 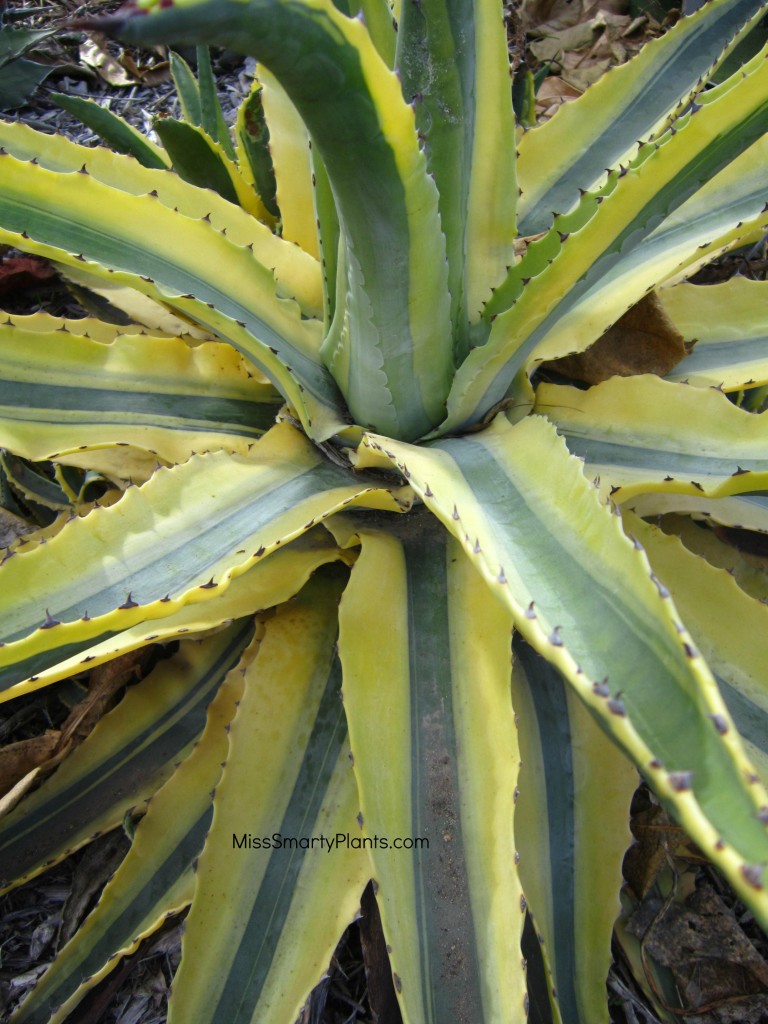 Agave victoriae-reginae has always been one of my favorites. One of the most compact of all agaves, it is extremely slow growing but well worth the wait. Each leaf margin is outlined in white and the line where the leaves overlapped is also in white. Each leaf is very rigid but armed with a very stiff spine on the end. The plant shown here was almost 2â² wide and made quite an impression. 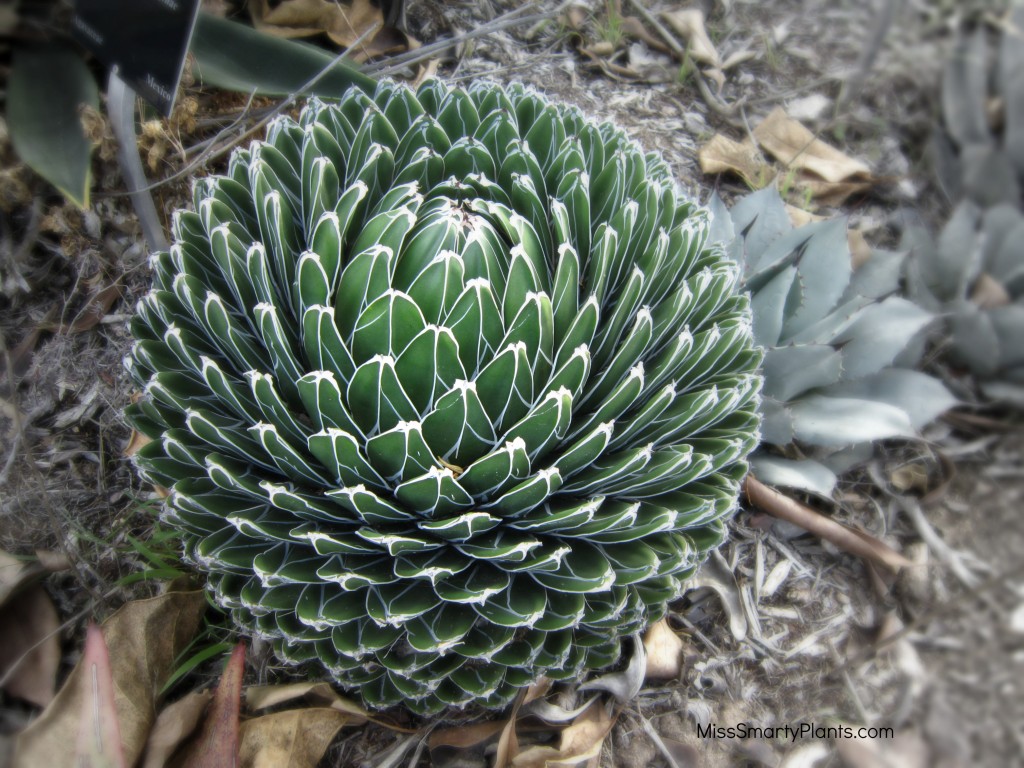 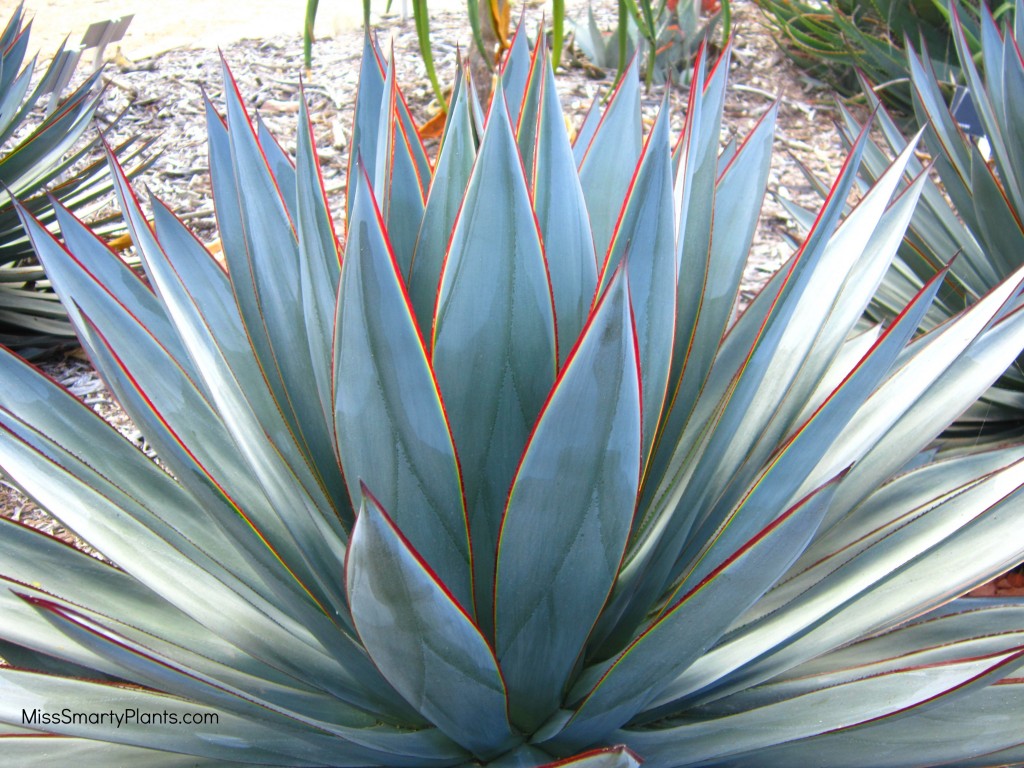 Another agave with variegated foliage, Agave vilmoriniana âVariegataâ, or Variegated Octopus Agave has less yellow on the margins than the âCorneliusâ but with a very loose, flowing form. It is amazing to me the difference in form between this Agave vilmoriniana âVariegataâ and the above Agave victoriae-reginae. The open, wavy form of the Octopus agave provides an interesting contrast to some of the more formal, stiff agaves available. This is a large plant, up to five or six feet wide from tip to tip. 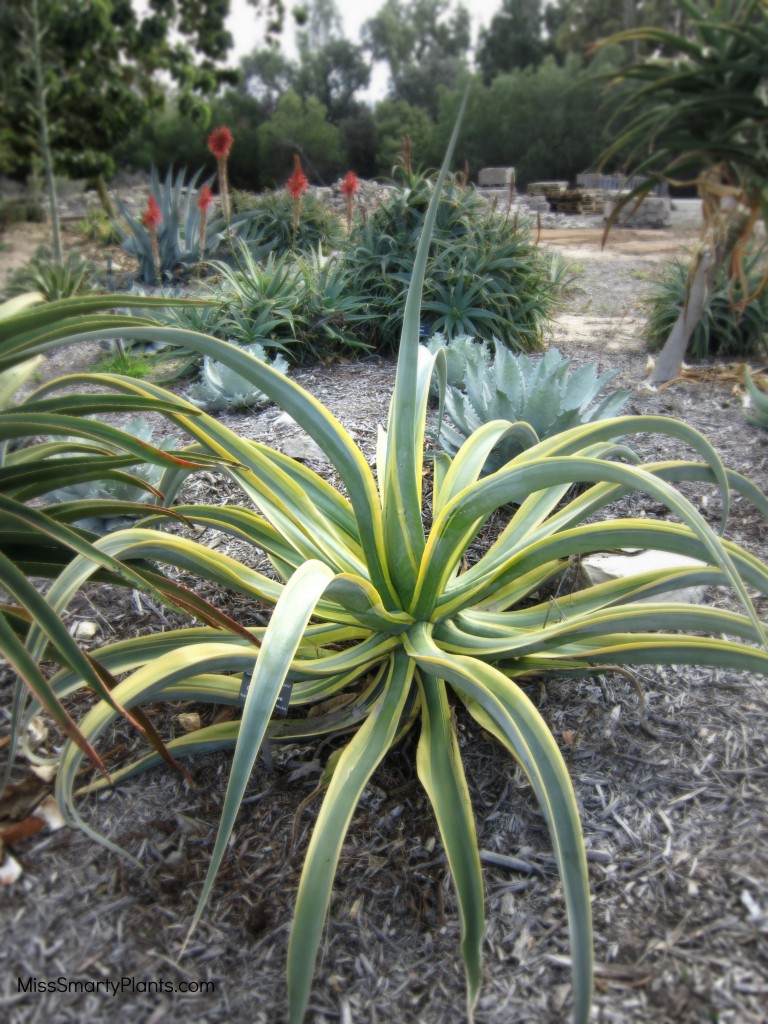 Agave potatorum var. verschaffeltii was one of the most stunning agaves at the South Coast Botanic Garden. These were plentiful and their large, formal rosettes looked really nice in contrast to the upright silver torch cactus. These are the first agaves to welcome visitors to the Desert Garden and their massive size and perfect form make a wonderful first impression. 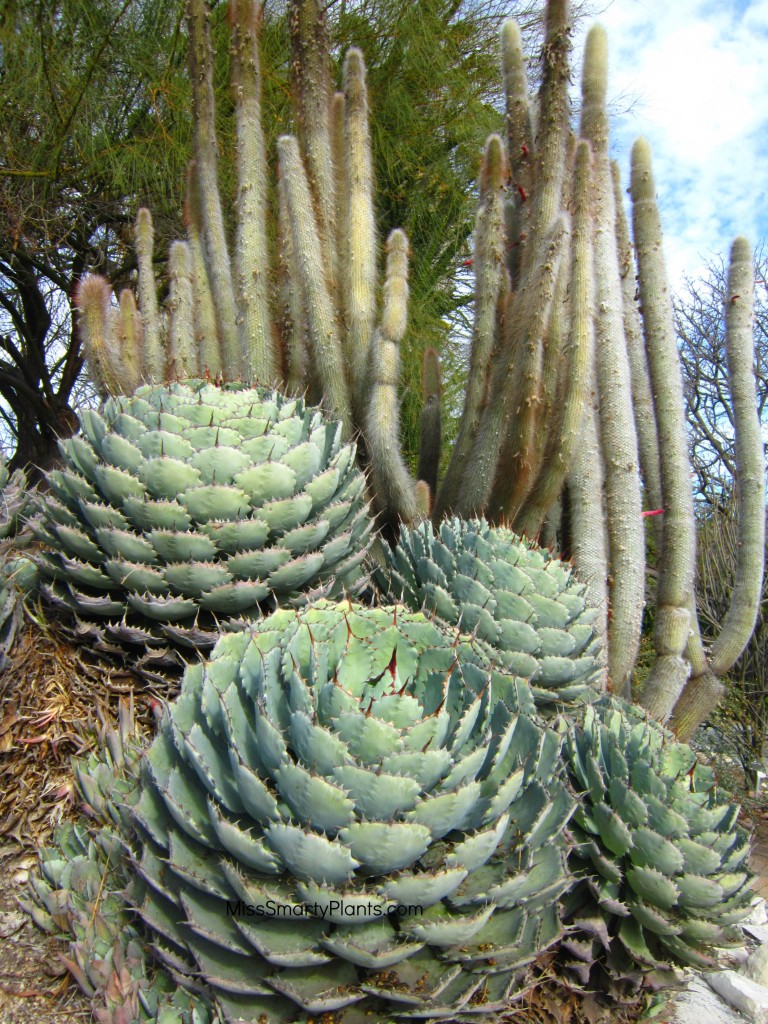 These Agave attenuata soften the landscape and add a nice soft, pale green to the gardens. Agave attenuata is also known by other names â foxtail, swanâs neck, and lionâs tail â mainly due to its curved stem feature, which is considered as uncommon among the species. Unlike many other agaves and aloes, the leaves on this species have no spines along the edges, creating a much less imposing appearance. 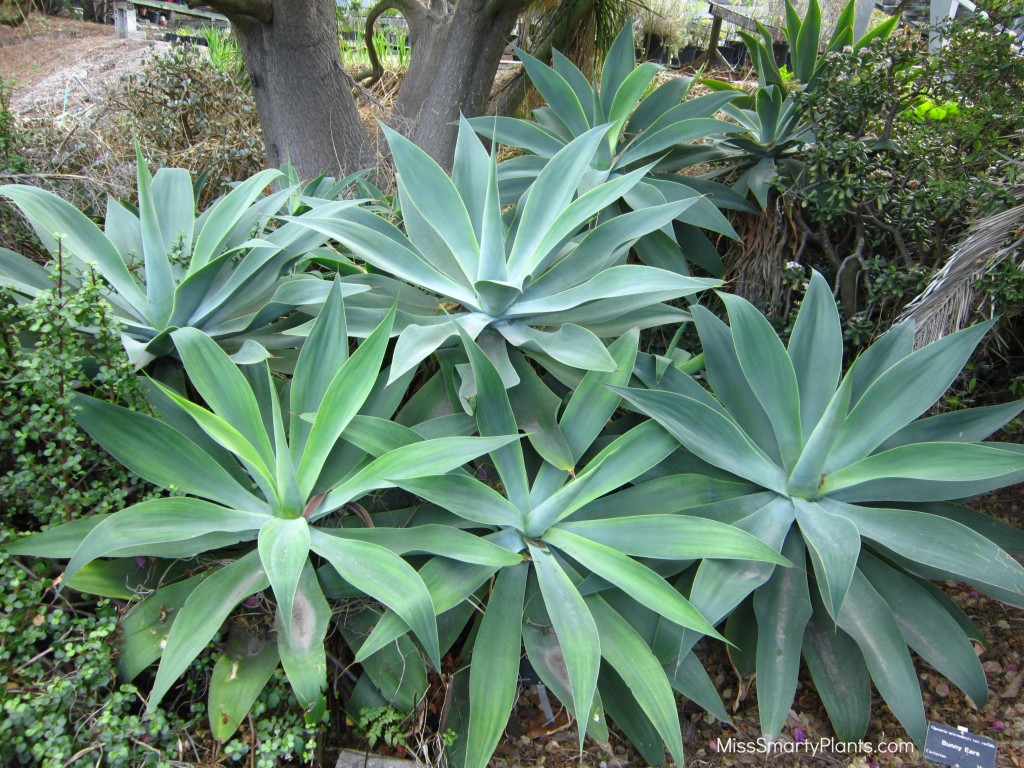 This photo shows a really cool agave which was unlabeled. The plantsÂ are less than 2â² in diameter and have amazing spines along the edges of the leaves that mimic a wave and have strongly accented curves. I havenât seen this variety before so if you know what it is please leave me a comment below! 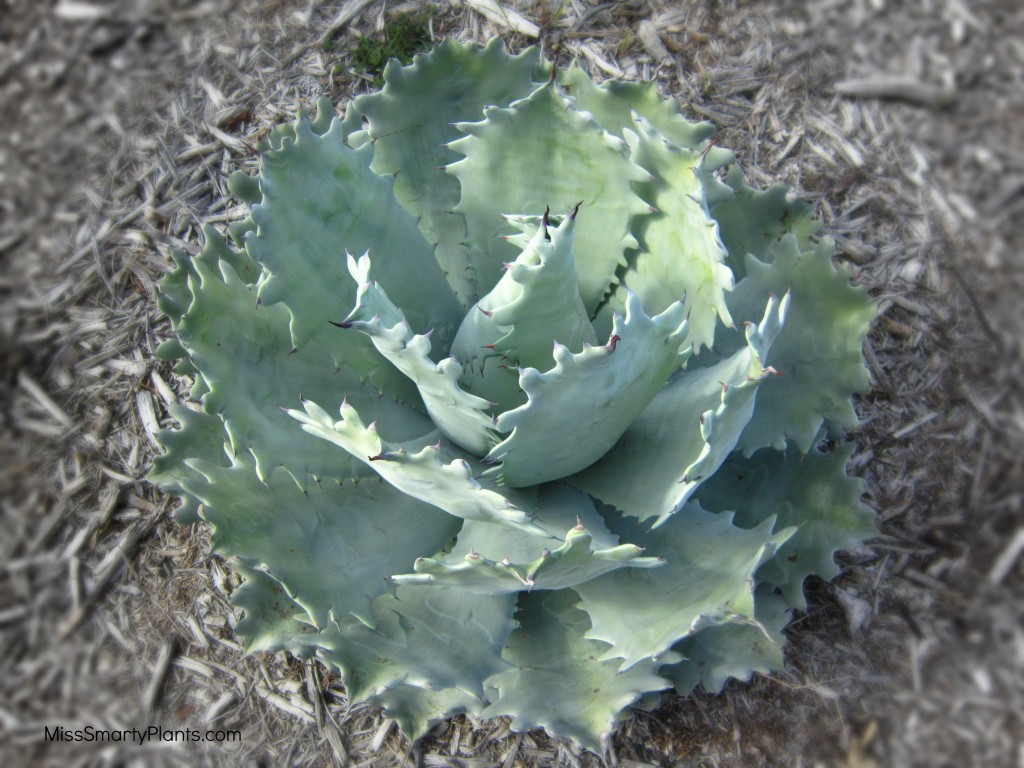 Whatâs the difference between Aloes and Agaves?

Agave tends to have more armor than aloe. Each agave plant consists of a rosette of long, stiff, spear-shaped, fleshy leaves often armed with teeth and tipped with a long terminal spine. Agave spp. are familiar to most people thanks to the commonly grown century plant, Agave americana, but there are more than 200 additional species of agave with potential landscape use. Agave varies in size from a few inches to more than 12 ft. tall and wide. Leaf color ranges from deep green to grass green to blue green to gray, and leaves may be striped or mottled with white, cream, yellow, or chartreuse.

Though it sometimes takes years for flowering to occur, agave develops branched spikes of yellow, rose, or white tubular flowers on incredibly tall stems 6â40 ft. above the plant. After flowering, the parent plant typically dies, although usually a number of small plants form around the base of the parent plant. The small plants are technically called âoffsetsâ but are commonly called âpups.â Sometimes called âCentury Plantâ there is the common misconception that agaves only flower every 100 years. It is usually much more quickly than that time frame and dependent on several factors including species and climate. Aloes are able to flower repeatedly and often put on many stalks of very showy flowers during the winter months.

While both agaves and aloes are considered succulents, the leaves of aloes are known for the fleshy, liquid filled structures. Agaves contain moisture, but are also filled with long fibrous strands.

Agaves are in the plant family Asparagaceae while Aloes are in the XanthorrhoeaceaeÂ family. At one point, both agaves and aloes wereÂ classified much more closely together, but advancing DNA technologies and analysis have separated them.

Lucky for us, visitors during the winter months get to enjoy the bright spikes of aloe flowers held high above the plants. Not all were flowering, but even those that didnât yet have flowers were full of spikes soon so open. 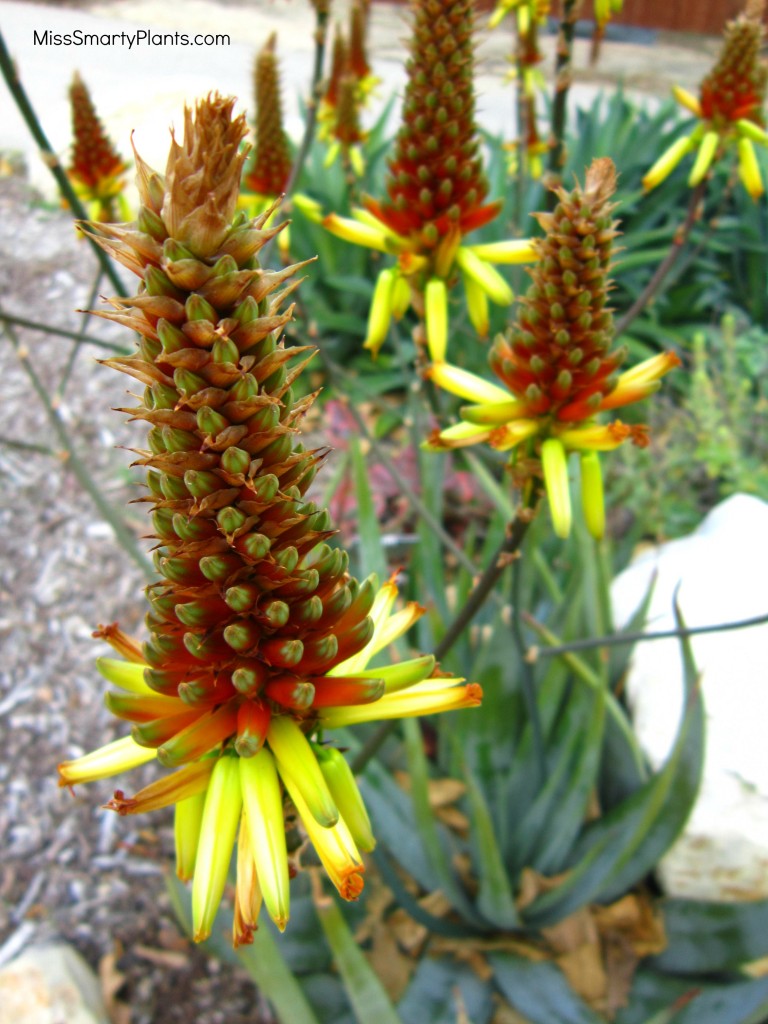 One of my favorite aloes is this Aloe elgonica, Rosy Pink Aloe. As you can see here the center is flush with this lovely rose color. The outer margins have the same glow against the green leaves.

These orange flower of the âBlue Elfâ Aloe were held high above the plants. 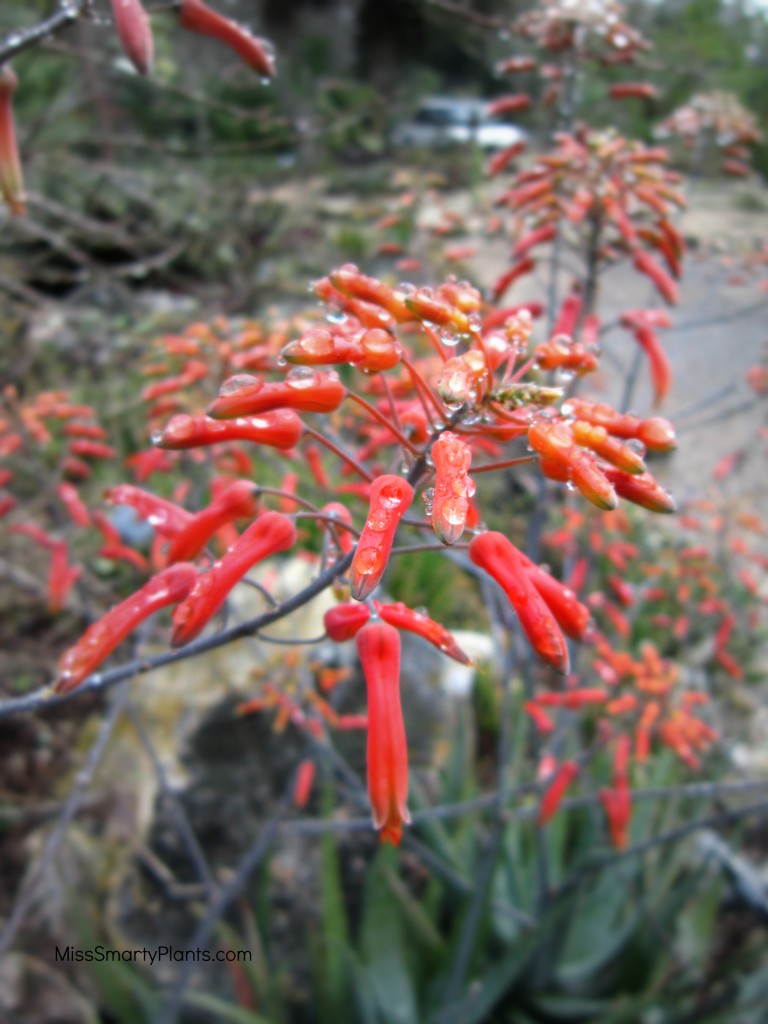 Dwarf Aloe âDonnieâÂ âhas rosettes of succulent leaves, spotted white with delicately toothed edges of deep pink to red. Very heat and drought tolerant when established. An ideal selection for a rock gardens and containers. Makes a fine addition to succulent collections, indoors or out.â It is available from MonroviaÂ and although this is their description here I would agree with every written word.â Iâve grown âDonnieâ in succulent terrariums and after more than a year it is growing really well. Â It is amazing to see just how compact this versatile plant stays in the garden. 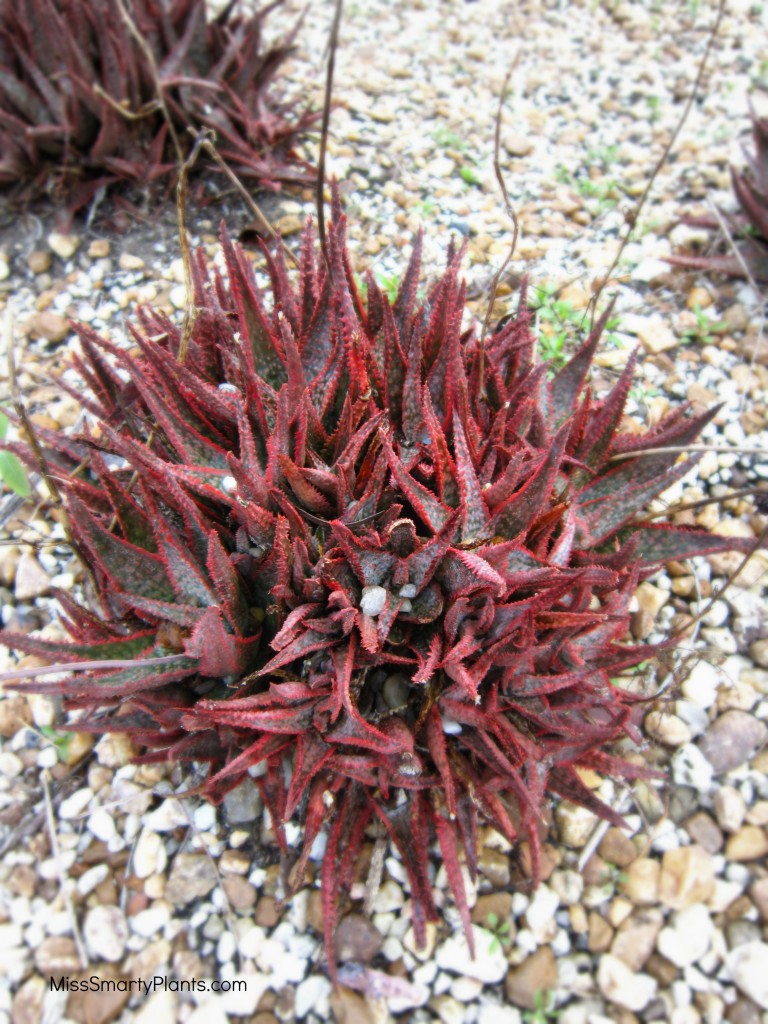 The agaves and aloes at the South Coast Botanical Garden cover the wide range of sizes, textures and colors available in these diverse plants. Now, if only I could have a larger yard to grow these myselfâ¦